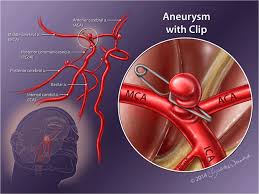 Size, location, and shape of cerebral aneurysms can help predict whether rupture is likely to occur, a Japanese study found. Compared with aneurysms 3 to 4 mm in size, 7-to-9-mm lesions had a hazard ratio for rupture of 3.35 (95% CI 1.87 to 6, P<0.001), according to Akio Morita, MD, PhD, of the University of Tokyo, and colleagues. And compared with lesions in the middle cerebral arteries, the hazard ratios were 2.02 (95% CI 1.13 to 3.58, P=0.02) for those in the anterior communicating artery and 1.90 (95% CI 1.12 to 3.21, P=0.02) for those in the internal carotid-posterior communicating artery, the researchers reported in the June 28 issue of the New England Journal of Medicine. Aside from size and location of the aneurysm, the presence of a protrusion on the wall of the lesion, or "daughter sac," also was associated with increased risk of rupture (HR 1.63, 95% CI 1.08 to 2.48, P=0.02). Incidentally identified cerebral aneurysms are not rarities, particularly among older adults, and the need for surgical intervention has remained controversial. To explore the natural history of these lesions and determine potential risk factors that may be associated with rupture, Morita and colleagues undertook a prospective study in multiple centers in Japan, enrolling 5,720 patients who were found to have 6,697 aneurysms. In most cases, patients were asymptomatic. Two-thirds were women, mean age was 62.5, and mean aneurysm size was 5.7 mm. The aneurysms typically were larger in older patients. Lesions of 7 mm or greater were identified in only 18% of patients younger than 50, but in almost 40% of patients 80 and older (P<0.001). The aneurysms were surgically repaired in 2,722 patients, at a median of 4 months after being discovered. During 11,660 aneurysm-years of follow-up, there were 111 cases of rupture, for an annual risk of 0.95 (95% CI 0.79 to 1.15). However, this may be an underestimate relating to case-selection bias, because patients were removed from the analysis at the time of surgical intervention, the researchers pointed out. In 35% of cases, the rupture was fatal, and in an additional 29%, the patients were at least moderately disabled. Lesions between 3 and 6 mm in size were not associated with an elevated risk for rupture, but the risk was exceedingly high for the largest aneurysms: 10 to 24 mm, HR 9.09 (95% CI 5.25 to 15.74, P<0.001) 25 mm or greater, HR 76.26 (95% CI 32.76 to 177.54, P<0.001) However, while women appeared to have a higher risk of rupture, this was not statistically significant in the multivariate analysis (HR 1.54, 95% CI 0.99 to 2.42). Unlike other studies, where smoking, hypertension, past subarachnoid hemorrhage, and multiple aneurysms were found to be risk factors, no significant association was seen in this cohort. Possible explanations for a lack of association for these factors included changes in patterns of smoking and blood pressure treatment, small numbers of previous subarachnoid hemorrhages, and the statistical approach of measuring rates of rupture per aneurysm-years rather than per patient. A limitation of the study was its inclusion of only Japanese patients, who have a higher incidence of subarachnoid hemorrhage compared with other groups. The risk of rupture was higher in this study than in another cohort, the International Study of Unruptured Intracranial Aneurysms (ISUIA), which included mostly white patients. Comparing the current study with ISUIA could provide further insight into the natural history of aneurysms, according to the researchers. "The explanation for the difference in the risk of rupture between our cohort and the ISUIA cohort may be multifactorial rather than just genetic," they suggested. From the American Heart Association: Guidelines for the Management of Aneurysmal Subarachnoid Hemorrhage The study and several of the authors have been supported by grants from Japanese Ministry of Health, Labor, and Welfare, the Japan Brain Foundation, and the National Cerebral and Cardiovascular Research Center of Japan. One author has been an adviser to Kyowa Hakko Kirin, and another receives royalties for neurosurgical instruments from Mizuho Ika Kogyo. Reviewed by Zalman S. Agus, MD Emeritus Professor, Perelman School of Medicine at the University of Pennsylvania and Dorothy Caputo, MA, BSN, RN, Nurse Planner Primary Source New England Journal of Medicine Source Reference: Morita A, et al "The natural course of unruptured cerebral aneurysms in a Japanese cohort" N Engl J Med 2012; 366: 2474-2482.